Given this week’s news, it’s hard to decide what poses the biggest threat to our lives: the recently predicted solar-induced ice age, the nuclear winter that may result from the “deal” with Iran, or our government agencies’ (and media’s) inability properly to identify and prioritize threats to our safety and security, whether at home or abroad. These issues and more, to be discussed on tonight’s show. See Program Notes, below, for all the stories, etc., I plan to discuss.

Join in live, either by phone or in the chatroom!

The show can be accessed here.

To access the show’s page at BlogTalk Radio, which will allow you to check out a past episode or to subscribe via iTunes and other services, use this link.

To access the iTunes store page for “Don’t Let It Go…Unheard,” where you can find past episodes, subscribe, and leave ratings and reviews (pretty please!), use this link.

Finally, if you would like to support the show financially, please donate using your Pay Pal account or Credit Card here.

Guest Post: The Relative Insignificance of the Greenhouse Effect

Ayn Rand Institute: Paving The Way For A Nuclear Iran

Barack Obama: “99% of World Community” Agrees With Me on Iranian Nuclear Deal (VIDEO)

What's the only explanation for “lone wolves” behaving as if they're part of a conspiracy? Adherence to an ideology.

Trump crosses one red line too many, declares John McCain “not a war hero”

Filed under Don't Let It Go...Unheard

Guest Post: The Relative Insignificance of the Greenhouse Effect

Yesterday I was discussing the trending stories about the coming ice age (e.g., here) with my friend, Deborah Sloan.* She mentioned an unpublished paper she had written about the insignificance, with respect to inducing changes in Earth’s temperature, of the “greenhouse effect.” Her paper, published below, is somewhat technical. But it’s worth the time and effort, as it will help you to evaluate the claims being made on both sides of the debate (today The Washington Post published what purports to be a rebuttal).

Bottom line: The current concentration of CO2 in our atmosphere is already absorbing nearly all the heat capable of being absorbed in this manner, so that further CO2 increases can have little effect. Significant temperature increases can be achieved only by adding significantly more energy from the sun. Accordingly, if we lose energy from the sun, as the new models (importantly not yet published for scrutiny) predict, additional CO2 can do little or nothing to make up for the difference.

The greenhouse effect is commonly presented as a malevolent, man-made mechanism leading to catastrophic anthropogenic global warming.  In this context, we are being called upon to make fundamental changes to our way of life by abandoning CO2-producing fossil fuels.  Must we?  Is this really true?  Given the stakes — the dramatic changes that may be forced upon us by means of government action — this is an important thing to understand.

Interaction of light with matter

Light is not heat.  Heat is the kinetic energy of molecular motion, whereas light is an electromagnetic phenomenon; a disturbance propagating through electromagnetic fields, like ripples in a pond.  The various types of light (e.g. infrared, microwave, ultraviolet, visible) are distinguished by their characteristic ranges of wavelengths, just as green and yellow light are distinguished within the visible range.

The types of interactions of light with matter include transmission (like a window pane), reflection (like a mirror) or absorption it (like a strip of asphalt on a sunny day).

Energy from the sun

The sun radiates energy in the form of light with a peak intensity in the visible range of wavelengths.  In the presence of visible light, atmospheric gases act like a window, allowing most of the light to pass through. However the surface of the earth acts mostly like asphalt, absorbing a significant fraction of the light and converting it into heat.

In the process of absorption, a photon of light interacts with the electromagnetic attributes of a molecule, and thereby causes an increase in the internal energy of the molecule (be it a change in the orbital configuration of an electron cloud to a higher energy state or a spring-like vibration of the molecule’s constituent atoms).

The net result of energy absorption at the earth’s surface is that the molecules get excited and the surface gets warmer.

The earth does not just keep getting arbitrarily hot over time as it continues to absorb energy from the sun.  Rather, it reaches a state of equilibrium — a global average temperature at which the rate of energy loss is equal to the rate of energy absorbed.  Earth’s mechanism for losing energy is a process called radiative cooling.  Radiative cooling entails the emission of energy in the form of photons (light), which radiate out into space.  Unlike the sun, the earth emits energy in the form of infrared light as opposed to visible light.  This difference will become important later in our discussion.

The process of emitting photons can be thought of as the inverse of the absorption process: a molecule falls to a lower internal energy state as it emits energy in the form of a photon.  Ultimately this results in a decrease in molecular kinetic energy, and the aggregate effect is cooling.

Radiative cooling is the earth’s only possible means of shedding energy back out into space.  That would be true regardless of the composition of the atmosphere, and it would be true even if we had no atmosphere at all.

Effect of the atmosphere

If there were no atmosphere, however, the earth would be much cooler.  In the presence of an atmosphere, molecules that comprise the materials of earth’s surface, which have absorbed energy from the sun, can transfer some of that energy to atmospheric gases by means of molecular collisions.

Imagine a baseball pitched to a brick wall: neglecting the effects of drag it would simply bounce back without any change in kinetic energy.  Now imagine we replace the brick wall with Barry Bonds, who cracks the ball with his bat and sends it soaring out of the field with an increased kinetic energy.

The result of this interaction is that, rather than being lost via radiative cooling, some of the earth’s absorbed energy is converted into molecular kinetic energy, i.e. heat, in the atmosphere (recall that heat is the energy of molecular motion).  The resulting equilibrium temperature is higher than what it would be without an atmosphere.

This, however, is not the greenhouse effect and would occur even without any greenhouse gases.

Though warmer than it would be in the absence of an atmosphere, the earth would still be very cold if it had no greenhouse gases: the average temperature near the surface would be about -18°C.

Oxygen and nitrogen can capture some of the absorbed energy by interacting with the surface materials. Nonetheless, as we have seen, a significant amount of energy still escapes past this “initial line of defense” in the form of emitted infrared radiation. Without an additional warming mechanism the earth would still cool itself too effectively, with an equilibrium temperature below that at which water freezes.

Fortunately, some atmospheric gases act like asphalt in the presence of infrared light: these gases can absorb the infrared light that is emitted from the earth’s surface, rather than transmitting it the way that oxygen and nitrogen do.  These are the greenhouse gases (GHGs) such as carbon dioxide (CO2).
Returning to our baseball analogy, the energized GHG molecules interact with the other molecules as Barry Bonds would do with a baseball.  When an excited CO2 molecule absorbs an IR photon and then collides with an oxygen molecule, it may transfer some of its internal energy to that oxygen molecule, which then has an increased kinetic energy after the collision.  The aggregate effect is heating; an increase in the earth’s equilibrium temperature as compared to what it would be without GHGs.  That is the greenhouse effect.

Before we reach a final and critical point, the interrelated mechanisms discussed thus far can be summarized as follows:

One might validly ask at this point: what if there is too much heating, and that becomes harmful to us?  The answer is, that can’t happen.  The reason is saturation.

The amount of energy absorbed and re-emitted by the earth is finite.  The re-emitted energy is distributed over a range of wavelengths of light in the infrared band.  At certain critical wavelengths within this band, — mostly those at which CO2 or water can absorb photons — the band is saturated.

There are other wavelengths at which CO2, water and other GHGs absorb IR light in a much weaker manner, kind of like a dirty window pane as opposed to a slab of asphalt.  These wavelengths are not yet saturated, which means that the absorption in these ranges of wavelengths can still go up with increased amounts of CO2 in the atmosphere.  However this increase will occur with an exponentially diminishing return.

This is to say, the greenhouse effect is logarithmic.  The following graph, created via absorption/emission simulations, illustrates the logarithmic variation of temperature increase with CO2 concentration (see also here), in a simplified scenario with a uniform temperature distribution in the atmosphere, a constant atmospheric thickness and no other GHGs besides CO2: 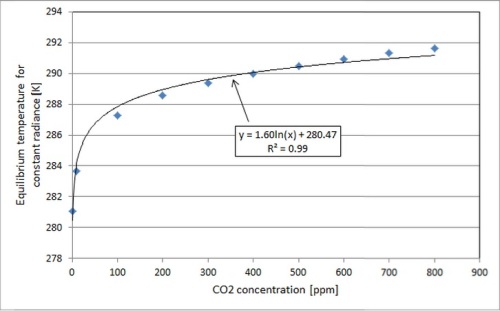 An important thing to note here is not the exact numerical values for temperature as a function of CO2 concentration, but the trend.  Our current CO2 concentration is about 400 ppm, so you can see that most of its warming potential has already been realized — the curve is pretty flat as we move up to higher concentrations of CO2.

Another important thing to note is that despite its mildness, the temperature variation trend indicated above is more severe than what we could expect to see in a real-world scenario.  This is because CO2 is not the only major GHG in earth’s atmosphere: for instance, water is a huge IR absorber and there is much more of it in the atmosphere than there is CO2, contributing to a greater present degree of saturation.  Because this is the case, the increase in global average temperature per unit of CO2 increase would actually be smaller than the graph above suggests.

Conclusions
Science is often wielded before the public as a means of intimidation: dire predictions are made in the name of science and, due to the division of labor inherent in an advanced civilization, most people lack the specialized knowledge required to deal with those claims.  My purpose here has been to combat that intimidation by explaining and de-mystifying the basic mechanisms associated with the greenhouse effect.  There is no rational basis for concluding that increased atmospheric CO2, as a by-product of an abundant, life-preserving industrial civilization, are a threat to mankind.

*Deborah Sloan is a mechanical engineer and a researcher at the Center for Industrial Progress. Learn more about industrial progress on Facebook.